Paris is the city of Love and Romance. Mais Oui! And never more so than over Christmas and Valentine’s Day. This is a true story about finding love in Paris. One I like telling as I begin to plan for all the holidays.

About this time, two years ago,  Bliss Travels, was leading a group through France for a photo shoot of wedding gowns for Nicole Miller Philadelphia, when the first of three paralyzing snow storms hit the East Coast of the US.  The photographer and I arrived in Provence for our destination wedding photo shoot, only to find that the model and all of the clothing were snowed in at home.

Our intrepid photographer and I were sitting in a tiny village restaurant having a Christmas lunch with the town (yes, pretty much the entire town) trying to decide how to photograph a destination wedding without a bride or bridal clothing when our waiter appeared-handsome, blue eyed and very photogenic. As we munched on pâté and warm toast, followed by a red wine soaked Provencal daube (for her) and a duck confit (for me) and the traditional 13 desserts (okay, it wasn’t a hardship!) we hatched a plan with the town councilwoman whose hospitality we were enjoying. When we told her we’d like to hijack the waiter as our model and she saw the look in our eyes, she knew we were serious. She jumped up from the table and ran out of the restaurant to find the keys to the ancient hilltop church before anyone changed their minds. She needn’t have worried. Once we told Julien it was “pretend”, our waiter graciously agreed to put on a suit and tie and come with us to the astounding church whose origins date back to the 5th century, and say “I do”.

For the next 36 hours as we received frantic updates from our ‘bride’ saying she (and our wedding dresses) were in transit, Julien continued to show up for photo shoots with a bow tie and a grin.

Finally, on our last night in this little village, we invited Julien to dinner and told him that our “bride” would be waiting when he arrived. Secretly, Sarah and I joked that Julien could not possibly believe we really had a model on the way. There had been so many canceled meetings.  As this became more and more comic, we plied Julien with pre dinner aperitifs and attempted to convince him -over his laughs and eye rolls — that our “bride” did exist. At that moment, our “bride” , Mia Calona, sauntered in as if she was only “fashionably late” for a party.  Julien took one look at her, smiled and said “oui, oui” (without asking if it was pretend).

However, like any ‘marriage of convenience’, theirs was over before it it began.  Julien was off to see his family for the holidays and we left for Chateauneuf du Pape and Paris. We spent three more days of photography and then spent Christmas Day in Paris (which I highly recommend) together celebrating the success of our trip.

The next morning, another paralyzing storm hit the East Coast, and Sarah found herself stuck in Charles de Gaulle airport for several hours, unable to leave France. So, she struck up a conversation with another delayed traveler (yes, part French) and, you guessed it, they hit it off. Within weeks, he had moved to Philadelphia. Within months they were engaged. And, now they are getting married! So, finding love in the City of Light and Love is always possible.  Just ask Sarah! 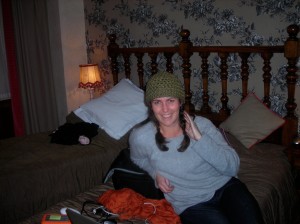 See France for yourself!