A Recent Liberation, A True Story of French American Relations 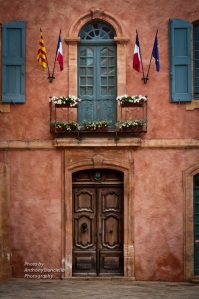 By Wendy Jaeger and Bill Mathesius

In recent years there has been much banter about the supposed strained nature of Franco-American relations. Americans believe the French dislike them. And, for their part, the French believe it is the Americans who dislike them.  I wish I had a euro for each time a French person has asked me why we Americans dislike them so much. Each side tells its own stories of rejection and animosity.  Americans tried to ban imports of French wine and our dislike was so intense we actually tried to change the name of our favorite fast food from French fries to “Freedom” fries – never mind that the deep-fried potato dish has no origin in French cuisine! For their part, the French feel invaded by American fast food and policy and have set about destroying “McDo,” as they call McDonalds (which, perhaps, may not be an altogether bad thing).

However, on a “people to people” level, things are much better than advertised. In fact, maybe they were never as bad as the press would have us believe. Over the years I have had the pleasure of taking many small groups to France as a part of my culinary/travel business, Bliss Travels. My clients are always surprised by the kindness and generosity of the people we encounter—not because we expect them to be otherwise. Rather, we wouldn’t expect anyone to give so freely of their time, of their knowledge, of themselves.  That summer was no exception.

I once more delivered a group to one of my favorite towns, a mid-size town nestled in a valley of the Luberon. It is an “authentic” town; little English is spoken. The town and the surrounding countryside are populated by families who have lived there for generations. There are no trains or planes to take you there. (In a charming and typical French twist, there is a train station office in the town, but the closest set of tracks is 100 kilometers away.) Perhaps this is why the town doesn’t change much from year to year. 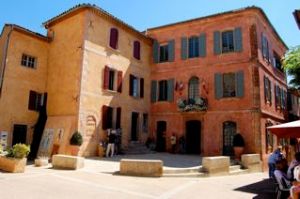 We chose an “off” day to walk the pedestrian part of the town. This town is known for its outstanding weekly market which, like a hard rain, spills and fills every corner of the town. It winds through the streets and squares, going on for miles. As a result, one can never really “see” the town itself during market day. My group arrived late afternoon to sample the fresh fruit, wine, candies and crafts and to uncover gifts for their children. My two pre-teen daughters were with me to help pick out treats. We stopped at a children’s candy store to ask a question.

The “responsable” – the man in charge – was an elderly gentleman sitting a stool and resting his hands on an intricately carved cane.  Though clearly a shopkeeper, he was crisply dressed in a black vest which was buttoned over a well worn white dress shirt, it in turn buttoned to the neck, and black pants with slight shiny patches at the knees. All that was missing was a black beret jauntily perched upon his head. He appeared to be in his later 60’s and spoke only fragmentary English. When I spoke to him in French, he asked me where I was from.  When I responded “America,” he half-smiled, saying, “Bravo!” At first, I thought this sarcastic. In recent years, American policy has been neither popular nor fully understood by the French. I responded with a frown of confusion and a tilt of my head.  Seeing my look of concern, he said “Non, non . . .” and repeated himself : “Bravo!” and added, in thickly accented English, “American are hero!” My face must have relaxed because he said “I tell you –my story.”

As my children stood next to me, I translated his story, sentence by sentence, the “responsable’s” extraordinary experience. His childhood was spent on his grandfather’s farm, several kilometers from the center of town. When he was about six years old, he was “helping [his] gran’pa” farm tomatoes when a tank and several trucks filled with soldiers pulled up to his field, guns pointing towards the farm house. After a breathless, fear-filled moment, the boy realized that the soldiers were Americans – they had come to liberate the town from the Nazi occupation. The boy and his grandfather greeted them with relief and cheer.

The soldiers, however, were starving for fresh fruit and vegetables, having existed on nothing but army rations for months. When they saw the tomatoes this little boy was tending, the tank commander asked if he could have “a taste,” miming a bite of an invisible tomato in his hand.  The boy looked to his gran’pa, who nodded.  The boy offered the commander the red tomato in his hand. The commander closed his eyes and bit into the fresh fruit.  With the seeds and juice running from the corners of his mouth, the soldier let his head fall back and an ecstatic smile appeared. His gran’pa ran to the farmshed and reappeared with a crate of tomatoes for the tank commander and his troops. The box of tomatoes was passed among the helmeted collection and the offering disappeared.  Though neither spoke a word of the other’s language, the commander thanked the farmer; the farmer thanked the tank commander. They both received a “taste” of what they most wanted! The tank commander radioed his experience to his headquarters and with applause and shouts in the air, he and his troops pulled out. 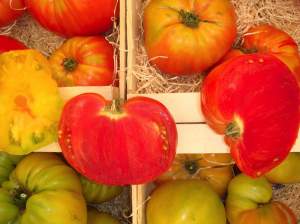 However, the farm was not empty for long. The commander’s transmission had been monitored by all of the other tanks in the area; the message that the tomatoes were superior and the farmer was generous did not go unnoticed.  Tanks and troops rolled in for days, all asking for “a taste” of the tomatoes. The crop of tomatoes was delivered by the grateful farmer and was consumed entirely by the grateful American troops.

And, it seems, nothing has really much changed over the last half century. We Americans keep coming back for more Provencal produce!  As our candy seller said, “Bravo!”

The candy store manager remembered this liberation “as if it were yesterday.”  “Look!” he said, pointing to the “goose bumps” on his arm. He was, in that moment, that six-year-old boy.

My children listened to this tale, hearing the lyric sounds of the French language and receiving the story in bits and pieces of interrupted English. They were amazed. We don’t hear often how we were heroes once, how the French were grateful to see us, how we were grateful to them and their tomatoes, and how we both may still share those qualities.

Wendy, owner of Bliss Travels, teaches French cuisine and designs one of kind culinary and cultural adventures in France. Bill Mathesius, a retired superior court judge, is an avid photographer. After their first experience in Paris, coordinated by Bliss Travels, much to their surprise, Bill and Marty became novice Francophiles.

8 comments on “A True Story of Americans in Provence: Insider Info!”

See France for yourself!